Desert plants grow on cracked land in an agricultural area that is dry due to water shortage in Salahudin province, Iraq, June 14, 2022. (Photo: Xinhua) 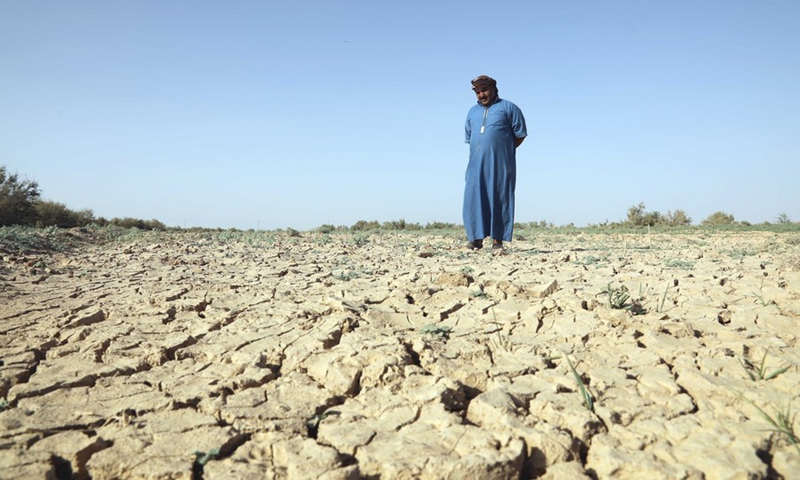 A farmer stands in the middle of his farm, which looks cracked due to drought and water shortage in Salahudin province, Iraq, June 14, 2022. (Xinhua/Xinhua) 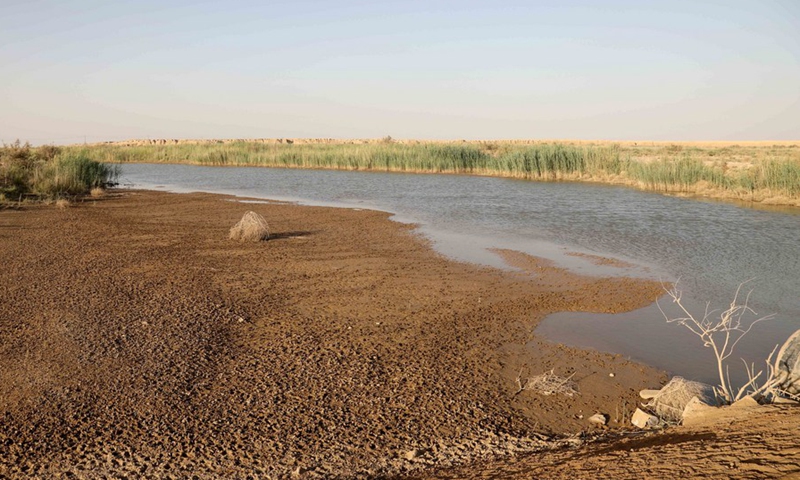 A semi-arid river in the village of Kobeba, southern Salahudin province, Iraq, on June 14, 2022. (Photo: Xinhua) 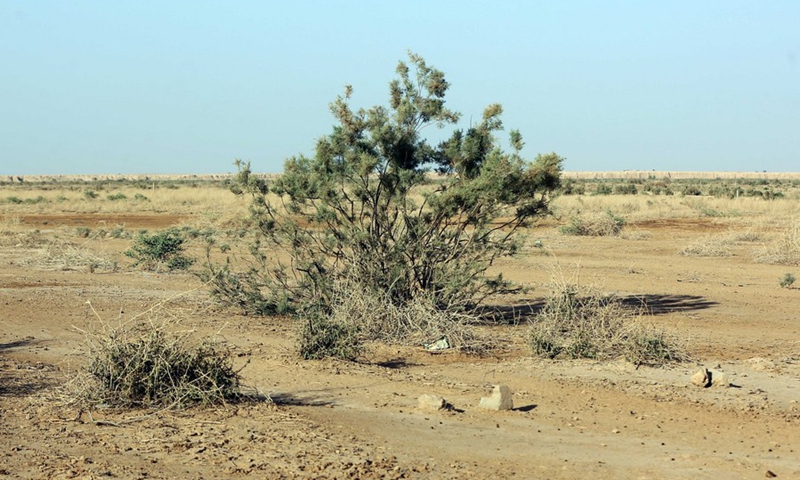 Desert plants grow in agricultural areas due to drought and lack of rainfall in Salahudin province, Iraq, June 14, 2022. (Photo: Xinhua)

dried trees on his farm in Iraq’s Salahudin province, north of Baghdad, Walid Ali Mohammad stood helpless, complaining about the drought that had killed his trees and animals and wiped out his family’s only livelihood.

“My farm and my crops dried up. My animals died of thirst. The water shortage ruined my life,” said 36-year-old Mohammed.

In recent years, the small river that runs through Mohammed’s village, Kubaiba, has started to dry up.

“Now there are few green trees left and the farm has turned into a barren land,” said Mohammed, who used to plant citrus fruits on his land.

Known in ancient times as Mesopotamia or the land between the two Tigris and Euphrates rivers, Iraq’s fertile agricultural lands are now at risk amid unprecedented climate change.

According to the United Nations Environment Programme, Iraq ranks as the fifth most vulnerable country in the world to climate change, which will negatively impact social security and health in the war-torn country. .

“We are suffering from severe water shortage as more than 90 percent of water comes from outside its borders,” Iraqi Environment Minister Jassim al-Falahi told Xinhua.

The minister said that one of the most effective measures to take is to rationalize the use of water in agriculture and irrigation, such as the use of drip irrigation or sprinklers.

The Iraqi government is waging a massive campaign to raise public awareness of the importance of dealing with the impact of climate change, al-Falahi added.

Hameed al-Nayef, spokesman for the Ministry of Agriculture, stressed that the danger of water shortage threatened food security in Iraq.

“There is a real danger and threat to food security in Iraq due to drought and water scarcity, which has led to a significant reduction in arable land this year, and this is impacting livelihoods. farmers,” al-Nayef told Xinhua. .

He also said that one of the ministry’s plans to deal with the water crisis in Iraq is to rely on groundwater and dig wells as an alternative to water supply for agriculture. .

Ali Radhy, the spokesperson for the Ministry of Water Resources, told Xinhua that “the issue of water is very important and fundamental for food security.”

Radhy said the Ministry of Water Resources has drawn up a plan to deal with the water shortage, which includes drilling wells in drought-affected areas and installing water pumping stations to supply water. some areas that do not have access to water due to low river levels.

The serious challenge of water scarcity prompted the First Deputy Speaker of the Iraqi Parliament, Hakim al-Zamili, on Thursday to threaten to impose a trade ban on Iran and Turkey if they continue to “limit the flow of the rivers from their lands”.