POLAR explorer Sir Ranulph Fiennes climbed the tallest mountains in the world, but admits he feared finding himself at the bottom of a Scottish whirlpool.

The adventurer, who conquered both poles, Mount Everest, the north face of the Eiger and discovered lost biblical cities, believed he bit more than he could chew while trying to make his way through the treacherous Corryvreckan.

And Sir Ranulph believes the locals’ tips for using SHEEP to survive in the narrow strait between the islands of Jura and Scarba were nothing but shaggy dog ​​stories.

The 81-year-old – who will be bringing his Living Dangerously speaking tour to Scotland this week – said: ‘I spent Christmas Day on the Isle of Muck once on the west coast of Scotland with my late wife Ginny.

“We were in a small rubber dinghy trying to avoid the whirlpools of the Corryvreckan.

“It’s all about the timing of trying to cross the strait, as you can feel the currents pulling the boat down and hear the engine run out.”

He adds, “But local farmers have told us that they sometimes have to throw their sheep overboard to lighten the load and prevent their boats from circling and sinking.

“One of the guys I know filmed them throwing their sheep into the water to save their boat.

Most read in The Scottish Sun

“The sheep can then swim away – apparently. Anyway, that’s what the farmer was telling me, but I’m not so sure.

Born in South Africa as Ranulph Twisleton-Wykeham-Fiennes – but known as Ran for short – he is officially the world’s greatest living explorer.

But Sir Ranulph, who was an officer in the Scots Grays and the SAS, has a habit of looking death in the face.

In 2000, he was left with severe frostbite while walking unsupported to the North Pole after rescuing his 300-pound sled after he plunged through ice floes breaking into icy waters.

He said: “I had no choice. I had to retrieve this sled because it contained my tent and my heater.

He later sawed off the dead ends of his fingers in a tool shed.

He said, “Of course my surgeon was not at all happy with my job, but reluctantly admitted that I didn’t do a bad job of it.

“But it’s really irritating to have your fingers and thumb of one hand half the length they should be – especially when you’re trying to mend your bow tie in a hurry for a black tie dinner.”

He was almost able to wear a bow tie professionally when he auditioned for the role of James Bond after Sir Sean Connery quit playing 007 for the second time in 1971.

He recalls: “I got into the bottom six of 200, where you met producer Cubby Broccoli, who was lying on a couch smoking a cigar.

“He glanced at me and said, ‘His hands are too big and he looks like a farmer – then.’

“The one who got it was called Roger Moore. But I don’t think I would have wanted to act even though I can’t really be sure because I didn’t.

However, his closest contact with death was not on an expedition but on a low-cost airline to Edinburgh in 2003, when he collapsed from a massive heart attack.

He says: “I was flying from Bristol to Edinburgh and we hadn’t taken off yet.

“I don’t remember at all, but apparently I collapsed on the ground and the hostess told the captain not to take off.

“A fire engine, which is still there, ran out with the cardiac defibrillator and they zapped me 13 times to get me started.

“I didn’t wake up until four days later after double bypass surgery.

“It’s also good that the plane didn’t take off or I probably wouldn’t be there. My timing was therefore really excellent on this occasion.

His conquests also included the discovery of the lost city of Ubar in 1991.

He says, “I spent 26 years looking for it only to find the site was right under the base camp that I had been using for almost a quarter of a century. It was a little frustrating. “

But is there something Sir Ranulph is really afraid of?

He replies: “Yes. I have had two phobias in my life. Spiders and dizziness.

“I cured my fear of spiders by joining the army of the Sultan of Oman. In the desert, these huge wolf spiders would crush you. So I had to get over it.

“And I cured my vertigo by climbing Mount Everest of course.”

That was in 2009, when he was 65 – and even though he’s now in his eighties, he still has his eyes set on other world records.

He says, “I was in Norway this week to discuss a new expedition. But that’s all I can say, because the damn Norwegians might have their eye on it too.

Sadly, in 2004, his polar explorer companion, Ginny, died of cancer.

He remarried the following year after meeting his second wife, Louise, at a talk he gave and became a father for the first time at the age of 62 with their daughter Elizabeth.

But in October this year, his explorer friend Sacha Dench, 43, nicknamed the “human swan”, was involved in a mid-air collision over the Highlands in a paramotor during his 3,000-mile journey around the UK.

Dan Burton, 54, who was on another plane, was killed in the crash.

He said, “It was very, very sad because she is a wonderful woman and I just hope the surgeons can put her legs back in place.

“She’s a very determined person and was about to give a talk with us in London and couldn’t of course, but we’ll be together again soon I’m sure as soon as she’s up and running.”

“It’s really sad that the gentleman with her is dead.”

OH, AND I ALSO WRITTEN A NIRO MOVIE TOO 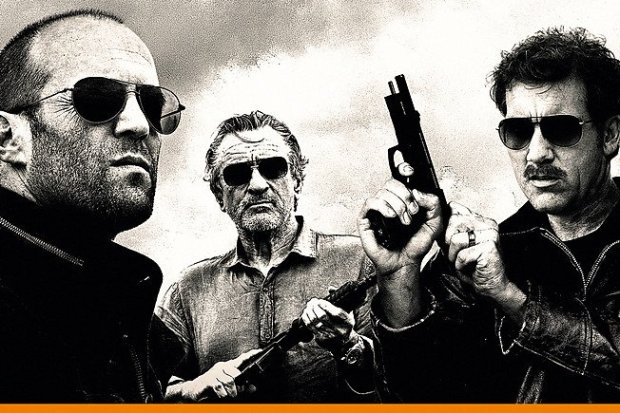 EXPLORER Sir Ranulph may also add another achievement to his impressive list of accomplishments – he wrote a Hollywood movie starring Robert De Niro.

The Adventurer is officially credited as the man behind the 2011 film Killer Elite, about an assassin paid to hunt down three members of the SAS.

However, Sir Ranulph admits that the film, which also starred Jason Stratham and Clive Owen, bore little resemblance to his book from which it was adapted.

He explains, “I wrote something called The Feather Men and the Americans made the movie and called it Killer Elite.

“They put Robert De Niro and Jason Stratham and all that in there and when I looked at it I couldn’t understand the parts that had to do with my book.

“But my book was still number one on the Sunday Times when it came out and on the cover it said ‘fact or fiction? It sells anyway.

And the accomplished author may see another of his books hit the big screen in the near future.

He says: “They are also thinking of making one called The Sett which is a quest of about ten years to find someone who had killed someone else’s wife – it took 10 years to get revenge. “

And is it a fact or a fiction?

Sir Ranulph timidly replies: “Yes – it is fact or fiction.”

As for his own visits to Scotland, Sir Ranulph insists he will never forget his Christmas day near the Corryvreckan.

Although he can now add a third thing he is afraid of to his list: whirlpools.

He says, “We loved being on Muck which was in 1969 because I had just come back with the Scot Grays from the Cold War in Germany.

“But I really didn’t like the Corryvreckan at all – I found the sea around me quite scary. I’m just glad I never ended up in the whirlpools like those poor sheep.